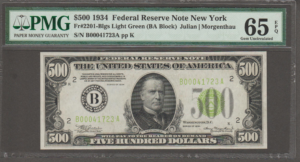 There are 4 “types” of small size $500 Federal Reserve Notes:

Each of these above “types” has unique characteristics, quite to its’ own. The 1928 notes were the first small size high denomination notes printed.  Although their print numbers were quite high, it is a speculated that only a fraction were released (the first serial number ranges) as most of survivors of the 12 issuing districts are only known to have low serial numbers.  The paper color is a distinctive creamy white and the seals and serial numbers are generally deep dark forest green (a fairly obscure LGS variety is known but this is really beyond the scope of this reading.)

The 1934 notes were printed and issued next. The first or earliest of these printings were the Series 1934 LGS notes (the focus of this article.)  These notes were printed on “bright white” paper and exhibit the highly sought after light green (lime green) seals and serial numbers. Embossing varies from heavy to virtually non-existent depending on a variety of factors.  All 12 Federal Reserve Banks printed and issued these LGS notes. – The 1934 Dark Green Seal notes followed.  Their serial numbers were a continuation of the LGS serial numbers. – The important take away here is that ALL of the 1934 LGS notes are low numbered serial number ranges.

Series 1934A $500’s were the last high denomination notes printed. As expected, their serial numbers are a continuation of the Series 1934 Dark Green Seal notes. (1934/34A  changeover pairs exist, as do reverse changeover pairs.) The 1934A notes were actually printed up until 1945.  Paper color is generally dingy grey, the result of a cost savings measure during WW2 where a different pulp was utilized in the paper.

With all four types of small size $500 Federal Reserve Notes presented now, it leads one to wonder; How rare are the 1934 Light Green Seal notes? Bureau of Engraving & Printing records show that a total of 917,628 1934 $500s were printed for all 12 districts.  (this includes both Light and Dark Green Seals.) Yet in their 10+ years of existence, PCGS & PMG Census data reveals that only 2028 LGS notes (< ¼ of 1%) have been graded for all 12 districts combined. Of these graded LGS notes, most fall into the FINE – VERY FINE grade range.  Only 105 of the notes are reported as GEMs. Of the 105 GEM’s, 61 are recorded on St Louis (due to a recently discovered hoard) leaving a mere 44 GEMs remaining that are spread across the other 11 districts. Boston, New York, Atlanta & Dallas districts have only 1 gem each, all of which are in The Stradivarius Collection.

This author believes there are two reasons why these LGS notes are so rare. Firstly, the lighter colored ink was only utilized for a very short period of time during the first printings of the 1934 notes, hence a much lower percentage of all 1934 notes are in fact LGS. These early LGS notes also circulated hard (harder than the later printings.)  This heavier circulation lead to the notes being turned in, redeemed and destroyed. 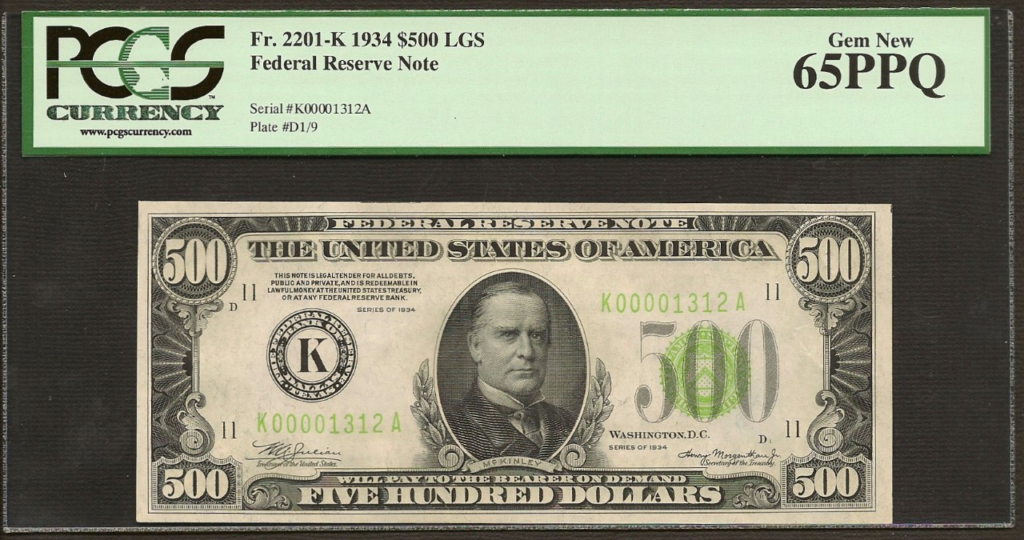 One glance at this list and the reader can see that this is truly an incredible assemblage of notes. From start to finish it took the collector more than 20 years to locate these 12 notes.  Five of twelve notes are finest known at PMG and PCGS-Currency. This means none tied none finer. Six of the other notes are tied finest known.  These stats alone put many of these notes at the absolute top of grading services population reports.  Infact, the first five notes should be considered unique.  The acquisition of each one of these 12 notes comes with a story. We thought we’d take the time to mention some those highlight notes here:

The highest graded note in the collection is the 2201-G, Chicago note. This bank was the second highest issuer for 1934 $500’s yet it’s long been known as close to impossible to locate in “true LGS” and in true UNC grade. We say “true LGS” because quite a bit of ambiguity arose with the release of what we call the “transitional green seal” Chicago district $500’s. This muddied the waters for years with collectors and investors wondering if their note was truly LGS. Only once the exact serial number ranges was defined for LGS / DGS 2201-G notes, did it finally become apparent how tough the LGS Chicago notes really were. – The collection example, a PCGS GEM 68 PPQ, is the finest note in the collection.  Even more astounding, it that this note is tied finest known for all districts, of all Series, for all $500’s graded by PCGS and PMG. The grading services have graded only three other GEM 68 $500’s. This makes the collector example “the ultimate type note” and one of the cornerstone notes of his collection.

The 2201-K Dallas note is another standout. 1934 LGS Dallas $500’s were unknown in any UNC grade until 2011.  A joint venture between Marc Michaelsen, Inc and KD Currency uncovered a consecutive run of five UNC 2201-K LGS notes.  Of these five notes, only one graded GEM, a PCGS GEM 65 PPQ example, and this note resides in the collection.  It still remains the only GEM 2201-K LGS note graded at both grading services.

The most underrated note of the group has to be the 2201-F, the 1934 Atlanta LGS $500. No one would have figured this for one of the tougher notes in the set but the collector had the hindsight to acquire this note in 2007, just two years after the inception of PMG and PCGS. His bet paid off. To this day his PCGS GEM 65PPQ still stands alone as the only GEM graded at either grading service. None tied, none finer.

The Richmond note was the last note the collector need to complete his GEM district set. For almost 10 years, census data indicated that just one GEM 2201-E Richmond LGS had been graded, but it was owned by an unknown collector and unavailable for purchase.  The discovery of a sequential pair of gem 2201-E Richmond $500 LGS in 2016 allowed the collector to finally acquire the 12th & final gem he needed, thus fulfilling his 20 year quest of completing his GEM set.

Looking down this impressive list of notes and grades again, it’s easy to see why this set is unmatched in quality and is simply impossible to reproduce.  With 5 of the 12 notes finest known (none tied, none finer) the set stands alone and at the absolute top of the PCGS and PMG population reports.

So what’s in store next for this incredible collection? We are excited to report that the collection will displayed in its entirety for the first time at the International Paper Money Show in Kansas City, MO in the June 2017.  The collector is currently engaged in completing other equally challenging currency sets. 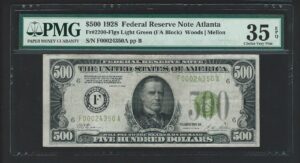 We were thrilled to have recently purchased an unlisted 1928 light green seal Atlanta District $500 Federal Reserve Note. The Standard Guide to Small-Size U.S. Paper Money by Schwartz & Lindquist lists only three known districts for 1928 light green seal $500s: New York, Chicago and Kansas City.  Atlanta is not listed, and frankly, we’ve never seen one of these notes either, until now.

Welcome To The New Highdenomination.com

Our first website, www.highdenomination.com, was warmly welcomed in 2004.  At the time the website was one of the few offering collectible currency and the only one specializing in high denomination notes.  Ten years later in 2014 we decided to revamp the website.  Little did we know it would take us two years, but, here we are in September 2016 rolling out the newest and latest version of “Highdenomination.com”.   Enjoy.

Until the early 2000s it was highly unlikely that you would ever encounter a counterfeit $1000 bill that was good enough to fool you.  Before that, most were produced in the Philippines over a twenty year period starting in the 1960s.  There are hundreds and thousands of such copies floating around including poorly produced copies of $100,000 Gold Certificates, also made in the Philippines.  These notes are also crudely produced and easy to spot.  However, a new counterfeit $1000 bill from Malaysia is the most accurate we’ve seen to date.

We first spotted the fake Malaysian $1000s while attending the Long Beach convention in the Winter of 2004. The fakes are surprisingly good and continue to fool coin dealers who buy these unknowingly at modest premiums over “face value”.  But even paying $1100 or $1200 each for these “notes” is a significant financial loss as this paper has absolutely no value what so ever. 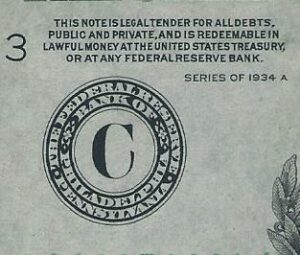 There are several key diagnostics or markers helpful in spotting these bogus $1000s. All examples observed to date have been Series 1934A Philadelphia District. Most fall into serial number range C00023xxxA with the most commonly encountered serial number being C00023323A. The bogus “notes” were produced by bleaching genuine U.S. $1 Federal Reserve Notes and then photo copying depictions of $1000 FRNs onto this paper. The result is a counterfeit that is actually produced on genuine U.S. bank note paper – a scary thought. One of the interesting tell tale signs of the counterfeit (observed from the back) are the lines of relief or embossing on Cleveland’s jacket. These lines run horizontally on the fake (like on a $1 FRN) not vertically (as on a $1000 FRN.)

There are three additional diagnostics on the bogus 1000s as outlined in the PCDA (Professional Currency Dealer Association) newsletter of 2004. They are:

To the untrained eye these notes can be very deceptive.  One way to avoid ever buying a counterfeit note is to buy only third party authenticated and graded banknotes . (By PCGS-Currency and PMG.) Otherwise, be cautious when considering “raw” Series 1934A Philly 1000s. Quite a few of these Malaysian fakes have already been confiscated by, or turned in to, the U.S. Secret Service (including 2 examples that we had). We plan on adding images of one of the known examples shortly.